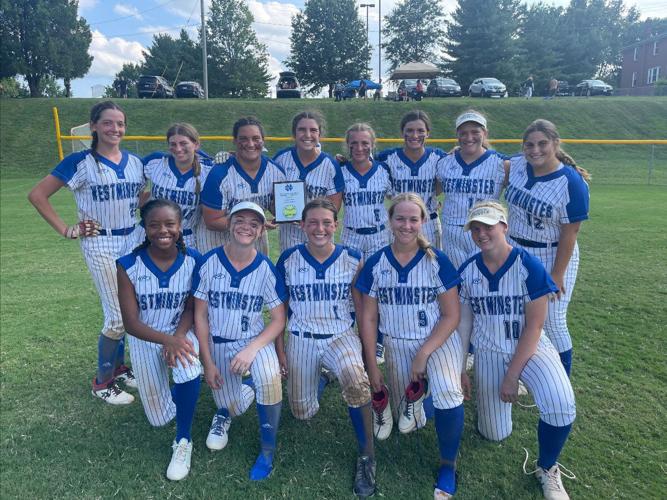 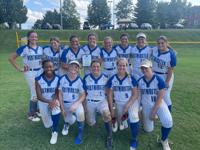 The Westminster Christian Academy Wildcats won the Notre Dame round-robin tournament to kick off the 2022 season with a solid start (Source: Provided) 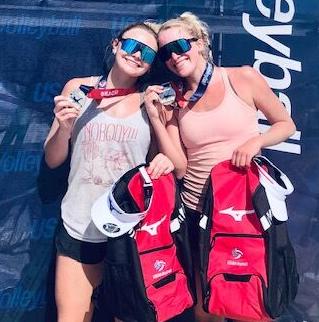 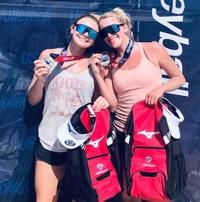 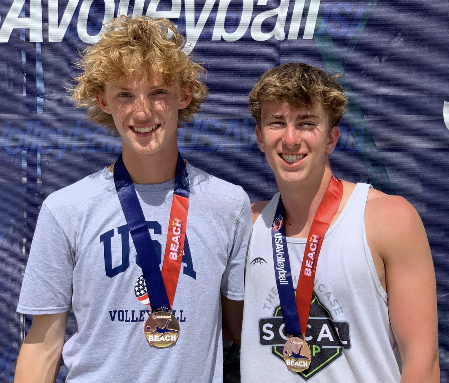 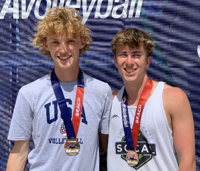 Luke Lilledahl, a former CBC wrestler, won the gold medal in the 113-pound division in the World Cadets Wrestling Championships (U17). Robinson, a former head coach at CBC, Timberland and Parkway North, led Team USA to its first ever victory in the event. (Source: Provided) 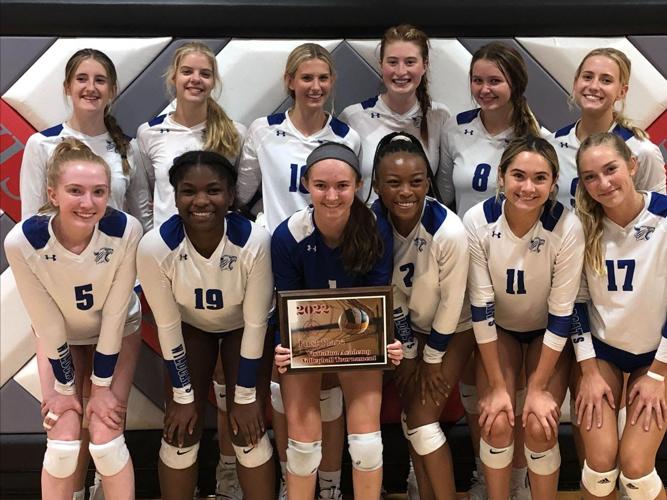 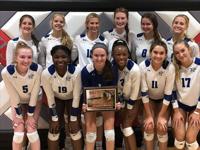 The Westminster Christian Academy Wildcats won the Notre Dame round-robin tournament to kick off the 2022 season with a solid start (Source: Provided)

Luke Lilledahl, a former CBC wrestler, won the gold medal in the 113-pound division in the World Cadets Wrestling Championships (U17). Robinson, a former head coach at CBC, Timberland and Parkway North, led Team USA to its first ever victory in the event. (Source: Provided)

Scanlon and Thomas, who also is a junior, competed at the USAV Beach Nationals 16U OPEN held recently in Fort Lauderdale, Florida. They qualified in Oklahoma at the national qualifier event to earn a spot and reach the national tournament.

Erin Miller of Lakeland, Florida; and Bri Luoma of Edgewater, Florida defeated Scanlon and Thomas 23-21, 21-16 in the championship match.

Coach Vincent Miranda of Prime Beach Training has coached the girls for one full year.

"Mia is relentless and seems to be able to give 100% of herself each play," Miranda said. "Mollie is tenacious. She always strives for the best outcome for each point."

Miranda said he wanted the girls to be able to feature their skill sets in the national event. He also said playing in such a tournament would help them in their recruitment process.

The girls played well in the final match, Miranda said.

"The finish was a close one, and hindsight is always 20/20," Miranda said. "I was pleased with how they handled themselves during the match specifically. Besides that, I was even more pleased with our post game talk and their demeanor."

The season has concluded. The girls are taking part in the offseason training program.

"They will not only train with the Prime Beach program, but with the p1440 Fab 50 and the p1440 futures tour," Miranda said. "I have had a blast coaching these two athletes and look forward to this offseason of training and playing."

"Both girls had numerous opportunities presented. They took my advice and really did their homework on all universities that were on the table," Miranda said. "The two universities that they picked were their choice and I couldn't be more proud."

The boys qualified for the national event at the Gateway National Qualifier.

Kubasta and Massey defeated the duo of Luke Couret and Richard Getteau 21-19, 19-21, 15-12. Couret is from Metairie, Louisiana. Getteau is from Houston, Texas.

"I have known Riley and the whole family growing up since his older brother and my brother are the same age and grew up playing sports together," Sheehan said. "Kyle I have known through club volleyball and always knew that he was a baller. So I just started coaching them this summer for beach and I was very excited to work with them because of the upside they both have."

Each athlete has his own unique strengths, Sheehan said.

"Both of them are very hard workers and every time we trained or had a practice, they were all ears to what I had to say and they even taught me a couple of things as I have only ever played and not coached at a high level," Sheehan said. "The thing about both of them that was the best part is they competed every game and took no team for granted no matter if it was the last seed or the first seed in the tournament, which many players, even at the college level, don't do."

Sheehan expected his tandem to do well in the national tournament.

"I did not tell them this because the pressure it can hold on those kids' shoulders is a great amount, but I really expected them to medal, which is what they did," Sheehan said. "The team who got second we beat the very first day pretty good. They knew that they should be in that championship game. Even though we lost to the team who won in the semifinals, we played them very closely and fought from behind multiple times when down as much as five points. That is the competitive fire and doing everything to win that made it so special."

Taking third and earning a medal is huge, Sheehan said. He believes the two can continue to improve.

"Tons of upside for both boys," Sheehan said. "Riley is a very good basketball player so he is still deciding between basketball and volleyball in college, but whichever one he chooses, I know that he will make the most of any opportunity that he gets. Kyle is a very gifted setter for indoor, so playing at the collegiate level would be what lies ahead for him. He just has to keep working on his craft and he will be perfectly fine.

"They each have very good support groups around them that can make that possible. They compete hard, which is what any coach could ask for."

After finishing second and securing a silver medal in 2021, Luke Lilledahl now has some gold.

"Definitely, I wanted it. I thought about losing that match last year every day until I won this year," said Lilledahl, who got a ring for winning the championship. "That match was my motivation this entire year. I was ecstatic when I won. It was one of the best moments in my life. That had been my goal since I lost last year in the finals."

Robinson helmed the U.S. men's freestyle team in Rome and made history. The U.S. won a team title for the first time ever at the World Cadets Wrestling Championships (U17). Team USA put the title out of reach with 190 points.

"It's definitely a big deal," said Robinson, who coached at Timberland and Parkway North before going to CBC. "I haven't coached my own world champion or a world championship team. I'm really happy about it. This is what we wanted."

The day started with pool play as the Wildcats played a round-robin format with Ladue, Francis Howell North and Lindbergh. The Wildcats won all three matches in straight sets to put them in the championship bracket.

The semifinal match was against Pool C champion Helias. The Crusaders claimed the first set 28-26. Facing their first deficit of the year, the Wildcats responded winning set two 25-22 and then the determining third set 25-20 to earn a spot in the championship match.

Francis Howell Central knocked off host Visitation to fill the other championship slot.

The first set of the championship match was a game of runs as Francis Howell Central opened up a 21-17 lead forcing a Westminster time-out. The Wildcats responded ripping off five straight points, ultimately winning 26-24. In set two, Westminster made a run after a 6-6 early start to force a Central time-out at 14-7. Central would come back to get as close as 18-14 before the Wildcats put it away 25-18 and took home the title.

The Westminster Christian Academy Wildcats won the Notre Dame round-robin tournament to kick off the season with a solid start.

In the first at-bat of the season, sophomore Allie Branstetter sent a St. Pius X pitch over the fence for a home run. The Wildcats scored an 11-3 victory. Pitcher Gabby Merrifield struck out five while scattering seven hits in six innings of work to pick up the win.

Westminster then topped a co-op team composed of players from St. Joseph's Academy and Rosati-Kain. The Wildcats earned an 8-3 win. Paige Branstetter went two-for-three at the plate, including a grand slam home run while driving in five runs.

In the final game of the tournament, Westminster lost to host Notre Dame 8-7. The Wildcats trailed 7-2 early, but battled back behind another Paige Branstetter home run and a three-run seventh inning. Addi Drumm also went two-for-three with two runs scored.

Because of win-loss record and tiebreakers, Westminster Christian Academy brought home the championship.

"I have been coaching Mikaela for three years and she is very talented," MICDS coach Brad Heinemann said. "She is one of the top players in Missouri and a great sport on the court. She is a caring, respectful person both on and off the court. Mikaela is our No. 1 player for the third year and a very important piece to making any sort of run in the playoffs."

Last fall when she was a sophomore, Mikulec helped the Rams to a second-place finish as a team in the Class 3 state team tennis tournament. She played with Rachel Li, who also is a junior this fall, to claim the doubles consolation championship at state.

According to the USTFCCCA, among the factors considered were team score and placement at the state championships, the margin of victory, performance against rankings if available, individual championships and how their teams' performances stacked up to previous years. Each honoree received a trophy from the USTFCCCA recognizing his or her achievements.

The Colts won the Class 4 state meet last spring. Parkway Central wound up with 78 points. The Colts had a 26-point margin of victory in the team title chase.

The tournament will be held at the Bellerive Country Club. This will be the second time the country club has hosted the championship. Bellerive hosted the event in 2008.

"Bellerive is thrilled to host the 2026 BMW Championship and welcome the FedExCup Playoffs back to St. Louis," said Bellerive Country Club President Rick Walsh in a statement. "Our club has a storied history of major championship golf. We expect to present a formidable test for the players while celebrating our incredible and supportive community."