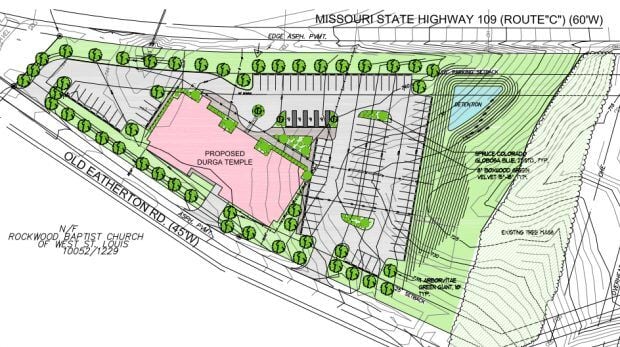 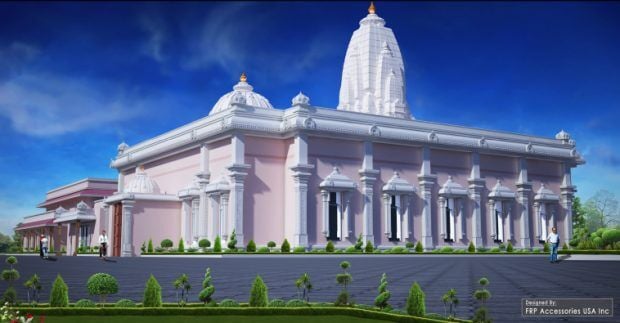 A nearly 15,000-square-foot ornamental temple has been proposed at

1431 Hwy. 109, near its juncture with Old Eatherton Road and Babler Park Drive on a 5.72-acre site owned by the Geeta Ramayan Group of St. Louis. The facility is to be known as the Durga Temple of St. Louis.

According to its website, “the Geeta Ramayan Group of St. Louis is an all-volunteer, non-political, tax-deductible charitable organization registered in Missouri. Its founding members first met in the late 1960s when the Indian population of St. Louis consisted of only a group of students and a few families.”

Today, the group’s Durga Temple’s literature notes that there is a growing number of Indian-Americans residing in Wildwood and surrounding cities. The temple is being proposed to be a primary center of Hindu religious and cultural activities in the St. Louis Metro area.

In June, the proposal was approved by the Wildwood Architectural Review Board (ARB). According to

Joe Vujnich, director of planning and parks, places of worship are permitted in all zoning districts.

The only reasonably flat grade on the property is to the north, which is the narrowest part of the site, Vujnich said. With a 50-foot setback from Hwy. 109 and a 25-foot (granted variance) setback from Old Eatherton Road, the potential construction area is greatly reduced. So, the single-story temple complex was designed to fit in the narrow north end of the site with parking relegated to the south of the building, where the site widens substantially.

Site preparation is currently underway and construction is slated to begin in late 2021, according to durgatemplestlouis.org.

Entrance to the site will be off Old Eatherton Road. The drive-up entrance is to the center of the building, oriented to the north-east end for religious reasons.

Salim Rangwala, principal with Rangwala Architects LLC, attended Wildwood ARB meetings in April and June to discuss the specifics of the temple. He said he has designed about 15 temples around the country, including one in Bridgeton and one in Ballwin.

The temple will be light pink in color with bone white ornamental features. It will contain three distinct zones – a prayer hall, an auditorium/dining hall and a central entry hall. The

shikhara, or spire, will be 59 feet in height.

The cost of the building is proposed to be at least $1.5 million.

Its exterior walls will be constructed of insulated concrete forms (

ICF) and clad with a stucco finish. Stucco is typical of temples all over North America because it blends with the temple ornamentation, Rangwala said. All the exterior ornamentation around doors and windows will be constructed of fiberglass and highly intricate. The ornate shikhara and roof dome also will be fiberglass and are typical of Ancient Indian Temple Architecture.

Rangwala explained that many of the temple’s features have religious significance.

He noted that in India, the temples are stand-alone buildings. Ancillary structures are separate from the temple; however, due to the cold climate in St. Louis, structures built here are connected.

ARB gave its approval of the project at its June 11 meeting. Next, the project will go before the Planning and Zoning Commission, which meets by Zoom on the first Monday of each month. Meetings can be viewed on the city’s YouTube channel.