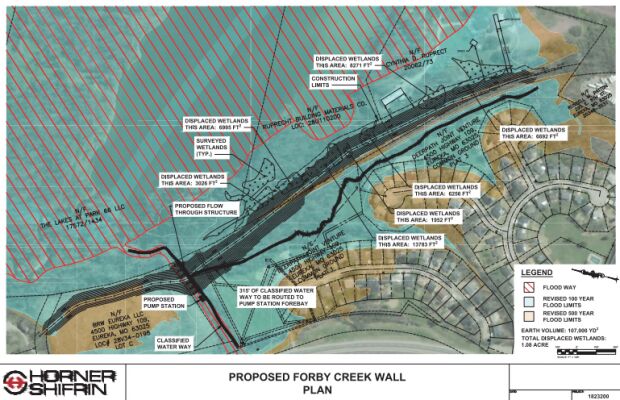 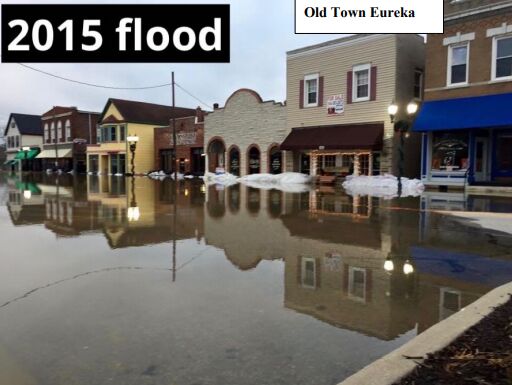 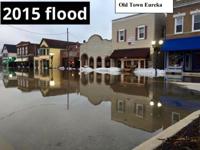 Old Town Eureka during the 2015 flood (Source: City of Eureka) 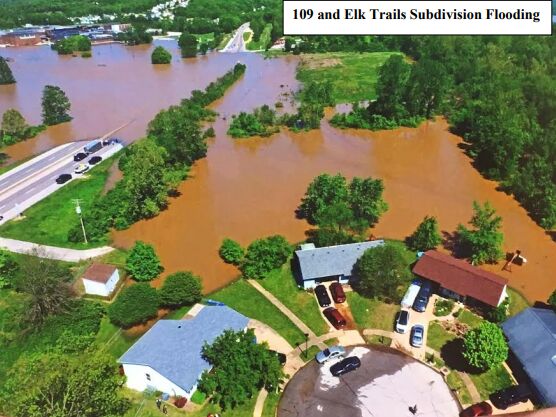 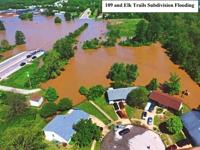 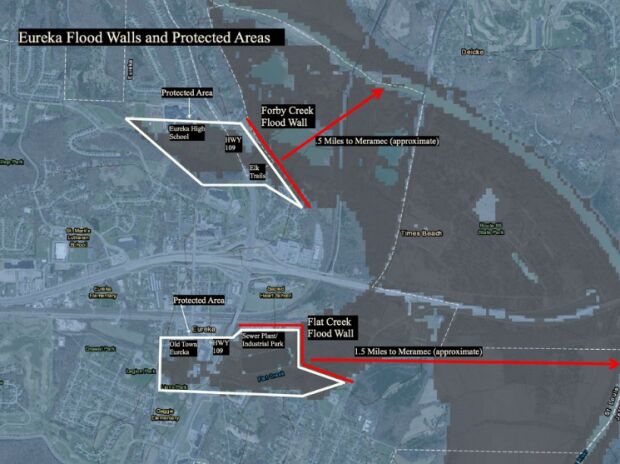 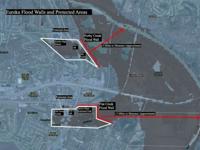 The city of Eureka has developed a major plan to deal with the flooding catastrophes that have plagued the city for years.

On Oct. 20, the Board of Aldermen approved the “City of Eureka Flood Prevention Plan.” The plan proposes building two flood walls that would provide Eureka with protection from a 500-year flood event.

The city has suffered through seven major river floods over the past 40 years. The floods of 2015 and 2017 had the highest river crests on record, according to Mayor Sean Flower.

Those floods caused major damage, in particular to homes in the Elk Trails subdivision and businesses in the historic Old Town district. Public facilities and infrastructure were significantly impacted and the city’s wastewater treatment plant was overtopped, causing effluent (liquid waste or sewage) to flow into the floodwaters and the Meramec River.

Eureka High incurred major losses and the flooding of Hwy. 109 and other roads caused citizens to be cut off from roadway access and emergency services.

In response to those floods, the city coordinated with the state and federal agencies for a buyout of flood-prone properties, which became known as Route 66 State Park (formerly Times Beach) and Kircher Park. City parks were placed in other flood-prone areas, while temporary barriers or relocations have protected other flood vulnerable areas.

Despite those efforts, large areas of the city remain vulnerable to flooding.

Two major creeks – Flat Creek and Forby Creek – run through the city. Almost all of the stormwater in the city discharges into one of those two creeks, and then into the Meramec River. The proposed flood walls would provide flood protection from the creeks. Protected areas would include Eureka High, the wastewater treatment plant, the Elks Trails subdivision and Old Town.

Engineering firm Horner & Shifrin, Inc. will design the Flood Protection Plan, which is to include engineering, cost estimates, survey locations and flood analysis, along with supporting data.

The Flat Creek Flood Wall, made of earth and concrete, would have a maximum height of 22.1 feet and a total length of 3,267 feet. It will be designed to allow for continued trail access through the area.

The Forby Creek Flood Wall would be made entirely of earthen material with a length of 3,000 feet and a maximum height of 22.1 feet.

“I view this as the best possible solution to preserve public safety and prevent damage to property and infrastructure by addressing disruptions caused by river flooding,” Flower said.

The city estimates that the flood walls will cost between $7.5 to $8 million. Eureka would fund the construction with revenue from Proposition E, which voters passed in 2018, and funds from the sale of the city water and sewer systems.

“One of the key reasons I supported Prop E and eventually ran for mayor was to solve the flooding problems we have in Eureka,” Flower said. “I am very proud of the many people that have worked on this plan, and look forward to making this plan a reality.”

The city also would use $4 million from the utility sale to fund the remaining project costs.

In addition to the initial cost of construction, there will be long-term costs associated with maintenance of the flood walls and related protection system. Those costs will need to be included in the annual city budget, Flower said.

The city is currently working with property owners directly impacted by the flood wall to obtain the entitlements needed to proceed.

Permits will also need to be issued by the U.S. Army Corps of Engineers. The city applied for the permits earlier this year and anticipates the public planning process to begin soon.

After receiving permits, construction of the walls could be complete within 12 to 15 months, with flood protection for the city possible in 2022, Flower said.

“By flood protecting Hwy. 109, traffic relief could be realized on Hwy. 100 and some emergent relief provided to first responders,” said Karen Frederich, civil engineer with Horner & Shifrin. “The economic benefit and impact go far beyond the immediate area, as it extends to the thousands of commuters that utilize this corridor daily as a means to access employment, medical services, schools and businesses.”