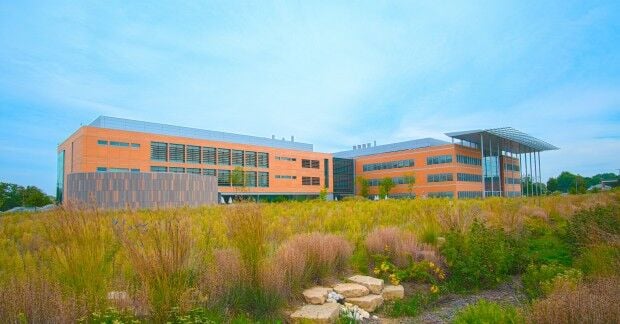 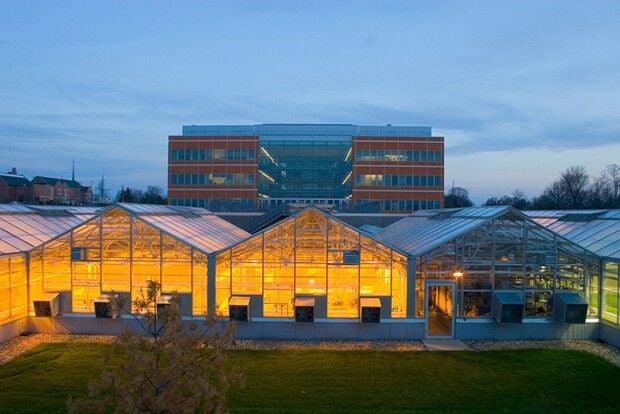 Docent Joan Culver needed just an apple, a knife and a few choice words to convince her tour group of the impending world food crisis. Her display was conducted in the lobby of the Donald Danforth Plant Science Center before her official tour began.

The apple was first cut into four equal pieces. Culver held up one of those pieces, stating that only about 1/4 of the earth is non-water, where food can be grown.

So, the total area where food can be grown was down to just 1/32 – roughly 3% of the planet. Culver then added that further reductions were due to harmful fertilizers.

Finally, Culver carefully cut off the apple peel from that small slice. She explained that, at our current population growth, the Earth’s 7 billion residents today should grow to about 10 billion by 2050.

In a few minutes, the purpose of the Donald Danforth Plant Science Center was perfectly explained in a nutshell – or rather an apple peel.

Founded in 1998, the Center’s original building was constructed in 2001. The William H. Danforth wing opened in 2016. It is the largest independent, not-for-profit plant science research institution in the world. Its mission is: “To Improve the Human Condition through Plant Science.”

All of the Center’s labs are open, their mini pods and other open spaces are designed so that scientists from different disciplines can connect and share ideas.  The Center’s culture of collaboration is geared toward accelerating research to bring innovations to market more rapidly due to the urgency of the combined current and future world food conditions and population growth.

The Center can mimic climates around the world in its approximately 80 growth chambers and has several research projects to improve staple crops grown in developing countries. For instance, Center scientists are working with partners in Kenya and Uganda to add important nutrients to cassava, a root vegetable similar to a potato, as well as make it resistant to two virus diseases which have been damaging farmers’ harvest for decades. Cassava is grown in over 30 African countries. Approximately one-third of the continent’s population relies on cassava’s starchy tuberous roots for over 50% of their daily caloric intake, making it the second most important staple food crop [after maize].

A cassava tuber [the edible part of the plant] can stay in the ground for a couple years until its needed for food, but there’s no way to tell whether or not it’s diseased until cut open. Making cassava more disease resistant could mean that years of growth are not wasted.

“The Center features over an acre of research-grade greenhouse space and over 80 controlled environment growth chambers. These state-of-the art facilities are available to Danforth laboratories, though scientists and companies from outside the Center can also rent space as small as one square foot to advance their research and commercialization efforts.

A rapidly growing number of those greenhouses are now utilizing horticultural LEDs, some with a magenta color and others in a more familiar bright white. These cutting-edge LED technologies are being used to improve general plant growth and crop quality, as well as to address specific research efforts such as breeding crops with improved photosynthetic capacity and higher yield. These new LED lights not only are proving to grow high quality crops, but they do so while operating at nearly half the electricity of conventional greenhouse lights, require far less maintenance, and are free of hazardous mercury common in fluorescent lights.  Danforth is excited about the early results and continuing potential of these LEDs to drive sustainable innovation for Center scientists and collaborators.

Using a multi-million-dollar phenotyping machine, scientists can measure plant characteristics that they can then use to measure things such as how efficiently plants use light or nutrients. Approximately 180,000 images are taken per five-week experiment.

Throughout its brief existence, Danforth Center researchers have published more than 1,000 important discoveries  in scientific publications, many of which are in the public domain. Additionally, its president, James C. Carrington, Ph.D., is recognized as one of the most highly-cited plant scientists in the world.

The Center is committed to the development of new companies and has a BioResearch & Development Growth [BRDG] Park located on its campus that is home to 15 companies and a workforce training program.

Tenant KWS SAAT describes itself as “an independent and family-owned company based in Germany that focuses on plant breeding, with activities in about 70 countries.” The company located their North American headquarters here in 2014.

Benson Hill Biosystems, a startup launched with technology developed at the Danforth Center, describes itself as “a crop improvement company unlocking the natural genetic diversity of plants.” It recently announced a plan to make St. Louis its official headquarters and will be located in the new EDGE@BRDG 160,000-square-foot building scheduled to open this spring.

The Donald Danforth Plant Science Center, BRDG Park, the Helix Incubator, Bayer Crop Science and the Yield Lab are anchors of 39º North, a 600-acre innovation district near the intersection of Creve Coeur and Olivette. Each of those entities are contributing to agricultural research and commercialization in significant ways.

Though the tour covers just a fragment of all that is taking place in the “AgCoast” of St. Louis County, it is an hour well spent.

Tours can be arranged by calling Brigid Thayer at (314) 587-1073 or emailing BThayer@danforthcenter.org. Those who attend must sign the guest book and provide their email address. Tour attendees will get invitations to three more events per year. Visitors must be at least 18 years old and photographs cannot be taken once visitors leave the lobby area.